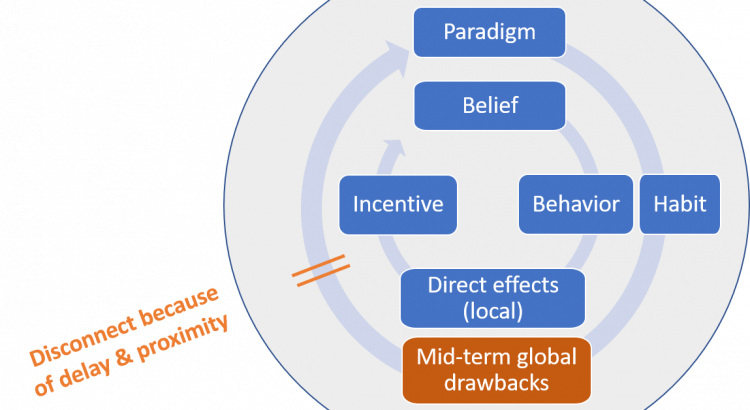 You could also say it is the behavior “allowed” by the organization:

Behavior is based on beliefs and experiences made as a result of one’s own behavior. The resulting incentives lead to the consolidation of the beliefs (inner feedback loop in the picture below). Interestingly, the behavior of the same people can be completely different in different environments, e.g. within different organizations or projects. From repeated behavior and the reactions of others, paradigms and attitudes, as well as and habits are formed (outer feedback loop in the picture below). Due to the temporal and spatial decoupling of the different positive and negative effects, people usually do not relate them. Therefore a conscious analysis is necessary.

How is organizational culture changed now?

“If you want something new, you have to stop something old.” Peter F. Drucker

Culture changes (i.e., behavioral changes) cannot be generated by announcement or by strategy paper. Such changes must be exemplified and practiced. They consist of either a change in WHAT the organization does or HOW it does it! Employees must experience and learn that new behavior and the omission of old behavior is not sanctioned, but leads to positive reactions and effects.

Only a small percentage of employees are willing to try new things on their own. If positive effects (incentives) fall away as a result of changed behavior, or if negative feedback even comes, this group of people will also not maintain the new behavior for long. It is therefore important that the organization, i.e. managers create a positive feedback loop as early as possible.

On the other hand, old behavior should not be sanctioned immediately and harshly. An appropriate transition period should be planned and allowed. Unfortunately, the positive feedback for the entire organization usually takes a longer time (see graphic), the loss of personal benefits due to old “local optimizations” is usually felt much sooner by those affected. Therefore, the omitted benefits should be compensated in some way, at least transitionally. At the very least, the changes must be clearly explained.